The principles of manufacturing the dolls have not changed for more than the century Matryoshka exists. Dolls are usually made of durable wood (linden and birch) which is well dried. At first master does the smallest, one-piece matryoshka doll, which can be quite tiny - like a grain of rice. Turning of the doll is a real art studied for years, some craftsmen-turners even learn to do it blindly!

Dolls are primed before painting, and varnished after painting. In the nineteenth century masters uasually used gouache - now the dolls are also being painted with aniline dyes, tempera, watercolors. But gouache is still a favorite. The first step is to paint a face and an apron with a picturesque image, and only after that - dress and kerchief. Since the mid-twentieth century dolls were not just painted, but also decorated with mother of pearl plates, straws, and later with the beads and crystals. But the first dolls had no intricate decorations - the traditional Russian matryoshka doll is still a plain painted wooden doll, without any encrustations. 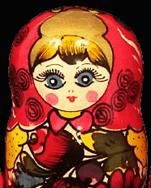 There are several tradional centres of Matryoshka productions in Russia. Most notable are Krutez school with their experimenting with the form of dolls, Polkhovsky Maidan school with their famous "Rose" and spirals drawings, Semenov of the Nizhniy Novgorod region with large unpainted planes and sumptuous bouquet of flowers at the apron, Vyat school, the most "northern" one, and Sergiev Posad school, histoirical centre of most Russiam folk production. Sergiev Posad dolls were so famous that even the Royal Family, who came to worship the relics of the St.-Trinity, regularly bought them. But Semenov dolls can boast being the biggest - traditionally they consist of 15-18 matryoshka dolls, and the most spacious Matryoshka contains over 72 dolls, the largest of which is a meter in height! By the way, Polkhovsky Maidan dolls still are produced, and they "feed" the whole region.